In the previous tutorial series, we looked at constructing and populating tables. The .r.yaml file contained:

That is, the results contained a table called ttest with the title ‘Independent Samples T-Test’, with 4 columns and 1 row.

In practice however, the number of rows in the table often isn’t fixed. They may vary based on the options the user has selected, or based on the results of the analysis itself. In this tutorial, we will concentrate on the former.

The first thing we need to do is change the dependent variable in the .a.yaml file, from Variable to Variables.

NOTE that you will have to shut jamovi down, and restart it in order to see changes to the analysis UI.

As we have changed the name and type of the dep variable, our t-test will no longer work. For now, you should comment out or delete the content of the .run() function of the t-test analysis, otherwise it will produce a number of errors. We will return to it later in this tutorial.

Having performed these modifications, your t-test UI should look something like: 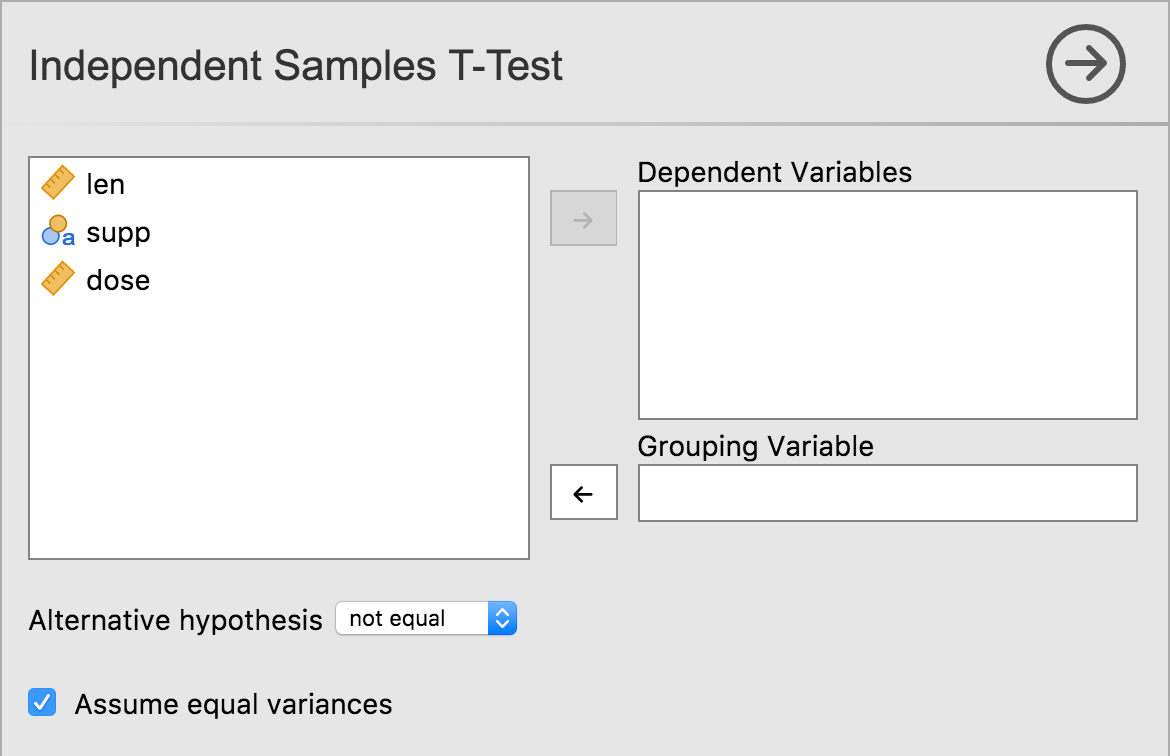 As can be seen, multiple dependent variables can now be specified.

Now let’s return to our .y.raml file, to the rows value in particular:

The way we do this, is with what’s called ‘data-binding’. Data-binding is where we ‘bind’ a particular property of a results object, to an option. In this case, we want to ‘bind’ the number of rows to the deps option. We do this be specifying the option inside of parentheses (or brackets).

When bound in this way, the number of rows in the table always matches the number of variables specified by the user. Let’s reinstall our module and see this in action:

As can be seen, our table grows and shrinks accordingly. But we can do one better. The first column should contain the variable name, and although we can add this using the Table’s setRow() function, there is a better way to do this. We can specify the content of the column in the .r.yaml file.

$key is a special value which maps to the row’s key. Make this change, and reinstall the module with jmvtools::install(). As can be seen the first column is now filled in appropriately.

Data-binding is nice, because it often leads to much simpler code. The .yaml files are able to take care of a lot of aspects of the results objects, and allows the R code (in the .b.R files) to be much simpler, and focused on performing the calculations. In computer science, this is called separation of concerns.

Now all we need do is add our analysis implementation to the .b.R file. We can fill the table in using either the rowKey or the rowNo.

We can now reinstall the module using jmvtools::install() (Note that this analysis will not work if you specify a nominal or ordinal variable as a dependent. So be sure to either use a continuous variable, or change the type of the variable to continuous before assigning it as a dependent. We will look at the correct way to handle nominal and ordinal variables in the next tutorial). You should have something like the following: